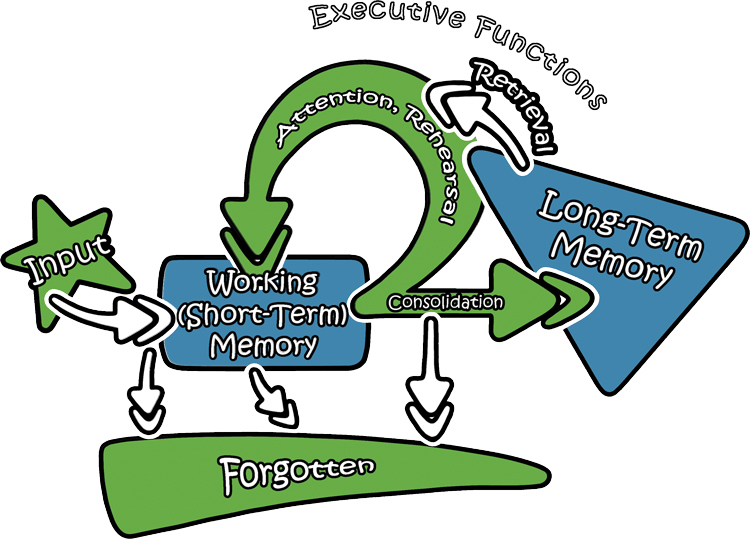 Educators can exploit the brain’s proclivity of comparing new information to its “previous knowledge” to help students learn. To do so effectively, however, the curriculum that educators follow must cater to the brain’s preference for relating new inputs to existing memories. A curriculum that consciously and logically builds on 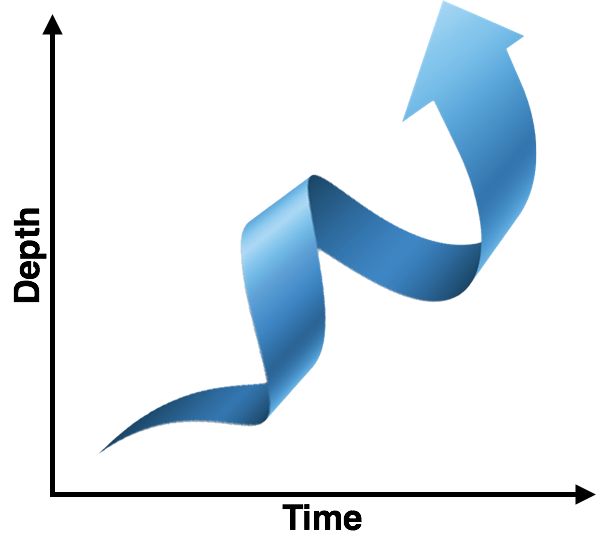 previous knowledge and adds additional detail and depth to memories will create strong long-term memories for students. The term for this strategy of creating systematic interplay between new concepts and previous knowledge we call cognitive spiraling.

A spiraling curriculum does not happen by accident. It must be perfectly planned and well-coordinated in implementation. One can certainly spiral a curriculum within a school year as an individual teacher, but more effective spiraling takes place when it is planned from Kindergarten through grade 8 or 12. Accomplishing multi-year spiraling obviously requires a great deal of coordination between many teachers and school administrators.

The concept of a spiraling curriculum may be represented as shown in the Depth/Time graph shown above. The x-axis represents the passage of time, and the y-axis represents increasing depth and detail. A subject that is initially presented in a primary grade may be readdressed repeatedly through intermediate, middle, and high schools, in increasing depth as time goes by. Each time that a concept is pulled from long-term memory and refined, sophistication increases and depth is expanded.

Subjects like English Language Arts and Mathematics have long been taught in a spiraling fashion (see the figures below). Who would ever think they could teach students to write prose if they do not first know the alphabet or the difference between a pronoun and verb or the rules of punctuation? Similarly, it seems only logical to teach students how to count and do basic mathematical operations like addition and subtraction before attempting algebra or geometry.

The same spiraling approach that is traditionally applied to ELA, mathematics, foreign language, and other disciplines is also necessary for science. Yet, across American K-12 classrooms, spiraling science curricula is not the norm. Instead, students are subjected to a “shotgun approach,” in which concepts are presented in a seemingly random order. Because students are receiving science concepts as factoids rather than within a logical framework, they have a very difficult time turning those concepts into long-term memories. It is both inefficient and painful to learn like this. Few students will like or understand science if we do not develop curriculum that spirals science concepts as we do in other academic subjects. Much of the thrust of the Next Generation Science Standards is devoted to the concept of integrating science education across academic disciplines and over years of curriculum. We believe this is one of the strongest features of NGSS.

In the brain development graph we discussed earlier, we showed the rapid increase in executive functions skill proficiency during the preschool and kindergarten years. Executive functions help in organizing the activity of diverse brain areas to focus attention and solve problems. Interestingly and importantly, executive functions provide the cognitive environment for another essential component of rational brain activity to occur – namely, critical thinking. 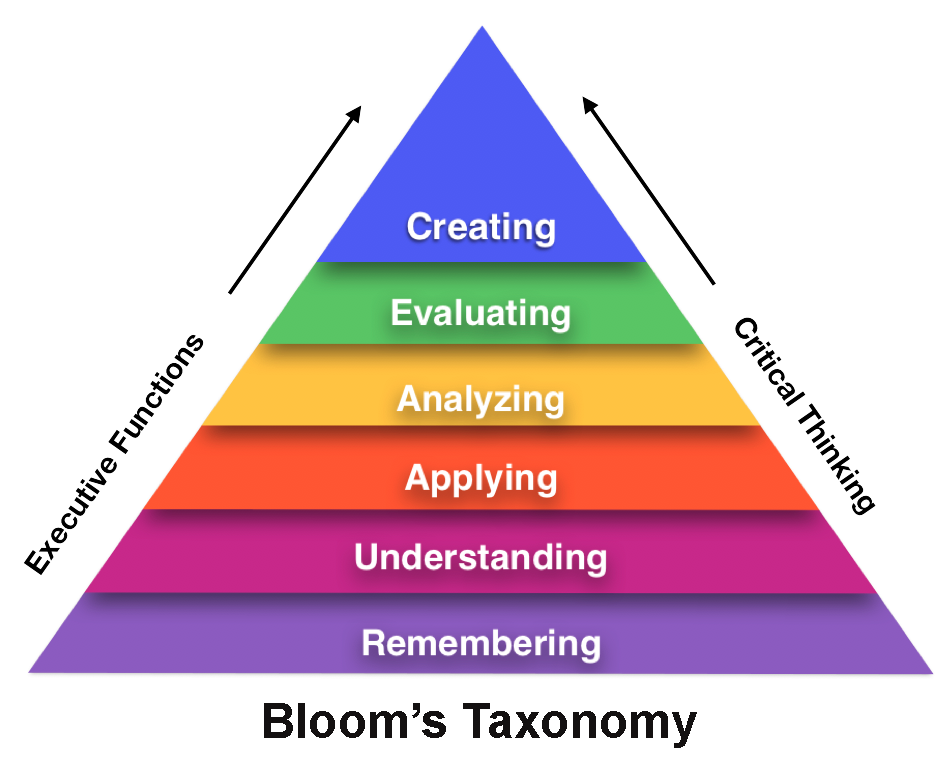 Many teachers and educational psychologists are familiar with the concept of Bloom’s Taxonomy. This hierarchal ordering of cognitive levels was first outlined by Benjamin Bloom in the 1950s and has had amazing staying power over the years. In fact, much of what we are learning through neuroscience and neurological imaging (fMRI, in particular) is entirely consistent with the taxonomy. The idea is that the more new information is used and applied, the better it is understood and remembered. Thus, simple memorization of information leads to the shallowest level of understanding and learning. As one moves up the taxonomy, higher and higher cognitive characteristics are required and developed.

Moving students up Bloom’s Taxonomy in a whole variety of subject areas might well be thought of as a primary objective of education. Importantly, both executive functions and critical thinking are also used and practiced as students move up this classic hierarchy of cognitive power. Consequently, early experiences, like LabLearner, help develop the most basic and important thinking skills at the precise time they are developmentally expanding with the maturing brain.