LabLearner Discussions are designed for you to sit and discuss science topics with your child/student. Each slide below contains rich content to stimulate intelligent discussions with your student regardless of their age. Directed discussion is one of the most powerful ways we can interact with each other. Start with the first slide then move to the next slide below it as your discussion proceeds. Give it a try with your student. 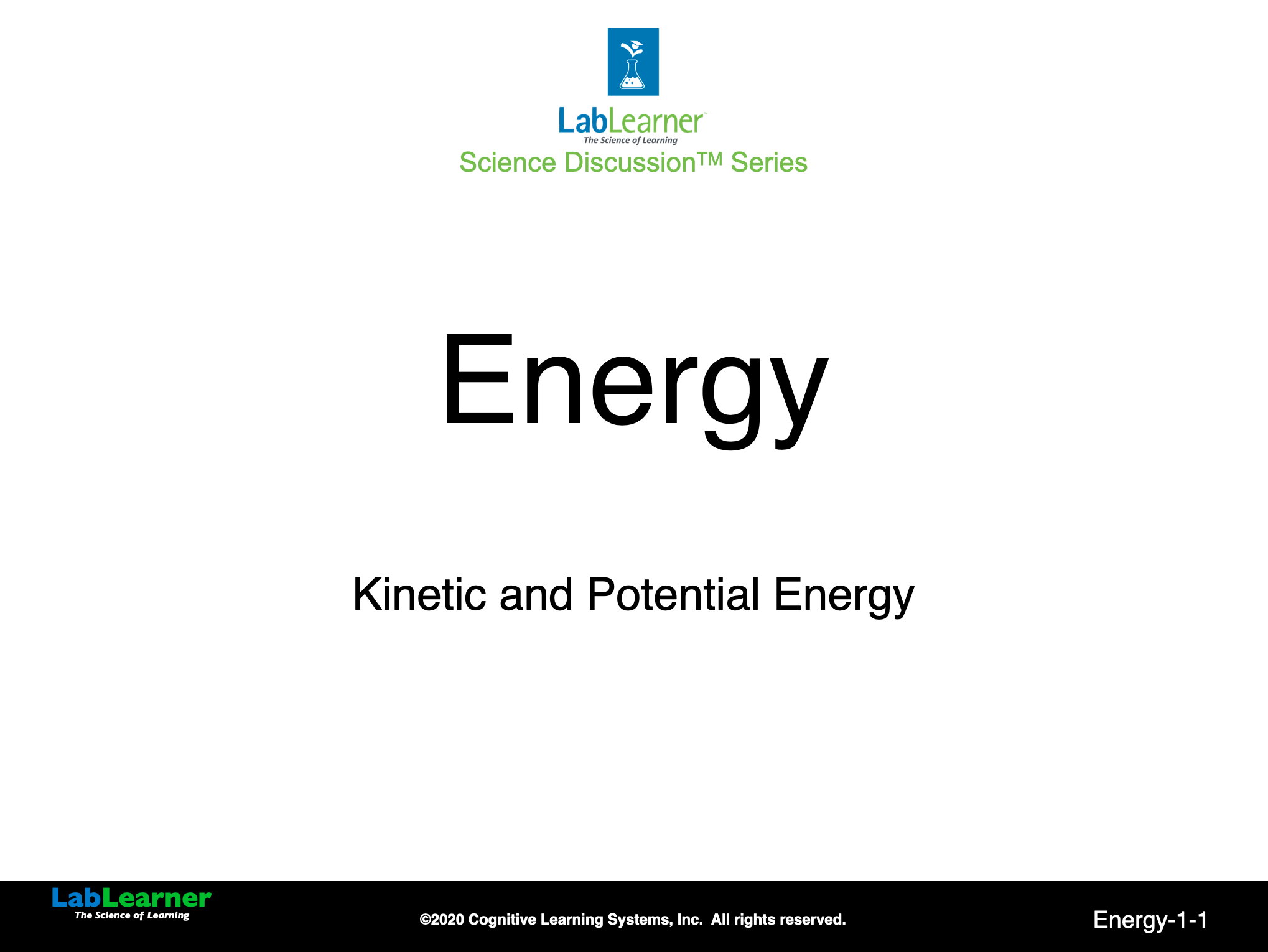 The two main goals of this first LabLearner Discussion in the intermediate Energy Series is to develop a firm understanding of the Law of Conservation of Energy and to establish the meaning of both potential and kinetic energy.

The Law of Conservation of Energy states that energy can neither be created nor destroyed, however, it can change forms. Looking at the big picture, this means that all energy that exists in the Universe today came into existence at the moment of the Big Bang, almost 14 billion years ago, and has never and will never change. Never!

Note: On a more practical level, the Law of Conservation of Energy helps us understand much more concrete phenomena that we encounter in everyday life. 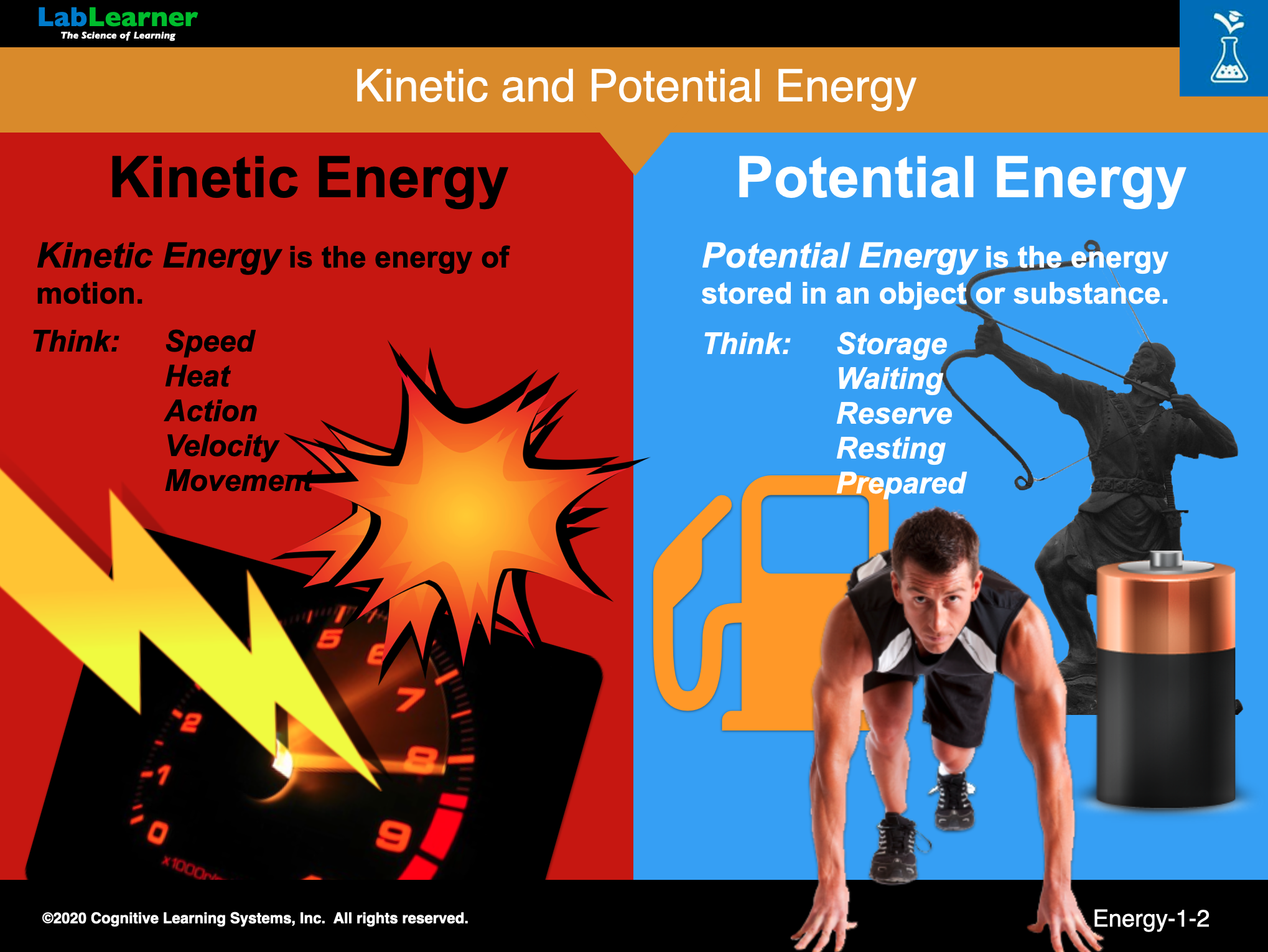 Kinetic energy is the energy of movement. If you see something moving, like an airplane or a baseball, for example, you easily can tell that the object has kinetic energy.

However, many times kinetic energy refers to the motion of molecules that we cannot see. When the molecules of an object move more rapidly, they have greater kinetic energy. We can detect this molecular movement as heat. Therefore, heat is a form of kinetic energy.

On the left of this slide are images and words that should help you get the “feel” that kinetic energy implies movement, action, heat, light, and so on.

Note: Another two examples of kinetic energy that might not be obvious to you are electrical and light energy. Both of these forms of energy are kinetic energy because of movement. In the case of electricity, it is the movement of electrons through a wire or a bolt of lightning. In the case of light, it is the movement of very small particles called photons that travel faster than anything else in the Universe!

The battery stores electrons that will begin moving (become kinetic) the moment it is inserted into a complete electrical circuit.

Finally, the archer in the back has drawn his bow. At this point, all of the energy in the bow and arrow system is in a potential form, stored in the fibers of the bent bow. Upon release, the bow will spring back to its original shape and all of the stored potential energy will be transferred to the arrow, which will be propelled toward its target. We will discuss the potential/kinetic energy conversion of the drawn bow in greater detail in a later slide. 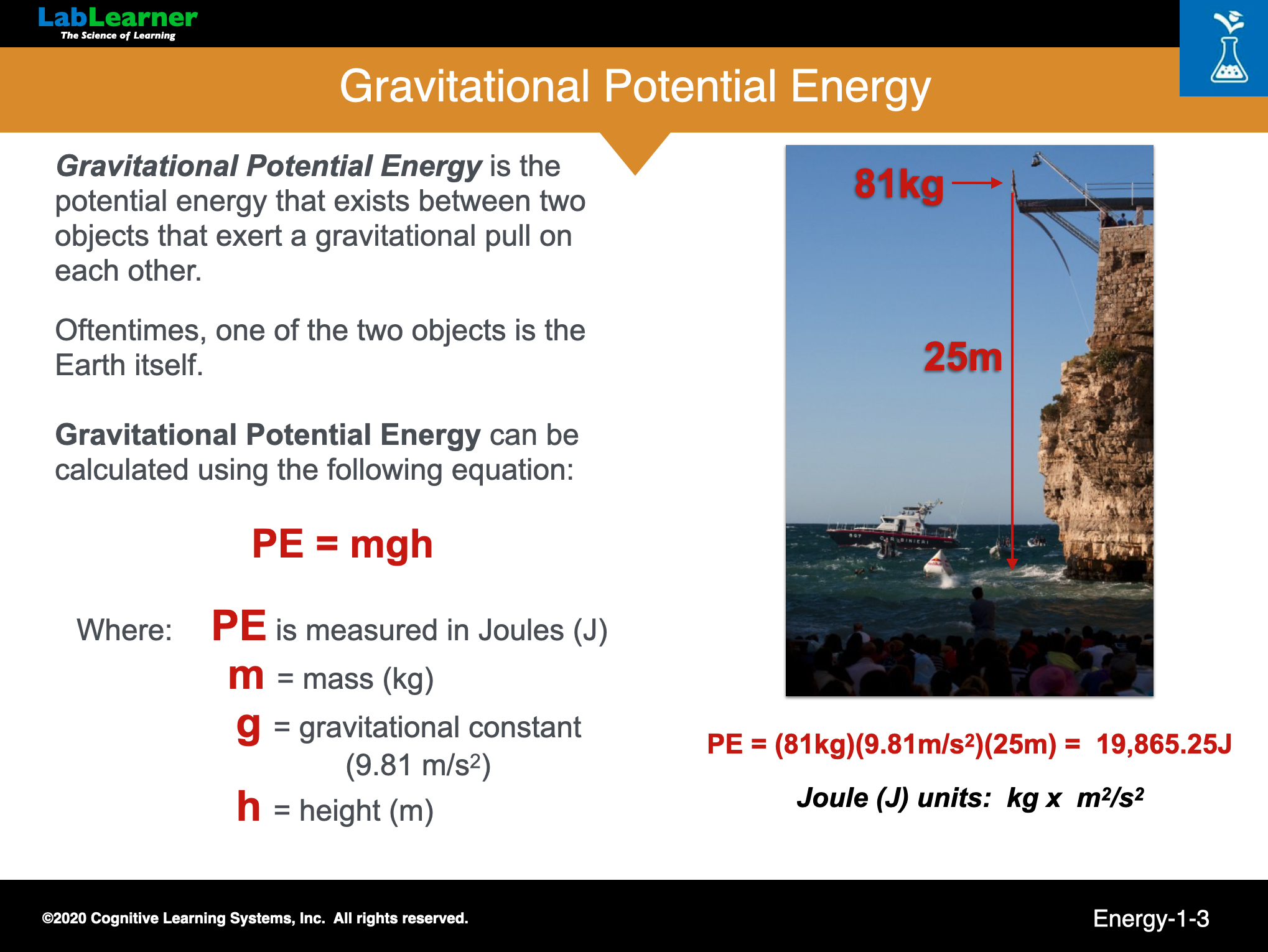 Now let’s begin applying some math to the kinetic energy/potential energy conversion. The basic mathematical formula for potential energy (PE) is PE = mgh. The mass (m) of an object is expressed in kilograms (kg). The height (h) of an object above a surface (water in this case) is expressed in meters. The final term (g) is a number that never changes and is therefore called a “constant”. In this case, we are referring to the gravitational constant (g), which is 9.81 m/s2 (that is 9.81 meters per second squared).

If we multiply the units for m x g x h, the final unit for potential energy (PE) is kg x m2/s2. This is referred to as a unit of energy called a Joule, which itself is abbreviated as J. Let’s really understand this concept by further applying the PE (potential energy) equation on the next two slides.

Note: While the concept of m2 is not difficult to think about, children are likely to have more of a problem with the concept of a second squared (s2). The s2 concept comes from a speed (which would be some distance per second, m/s, for example) that changes over time and thus is a property of something called acceleration. We will not discuss acceleration further at this time. 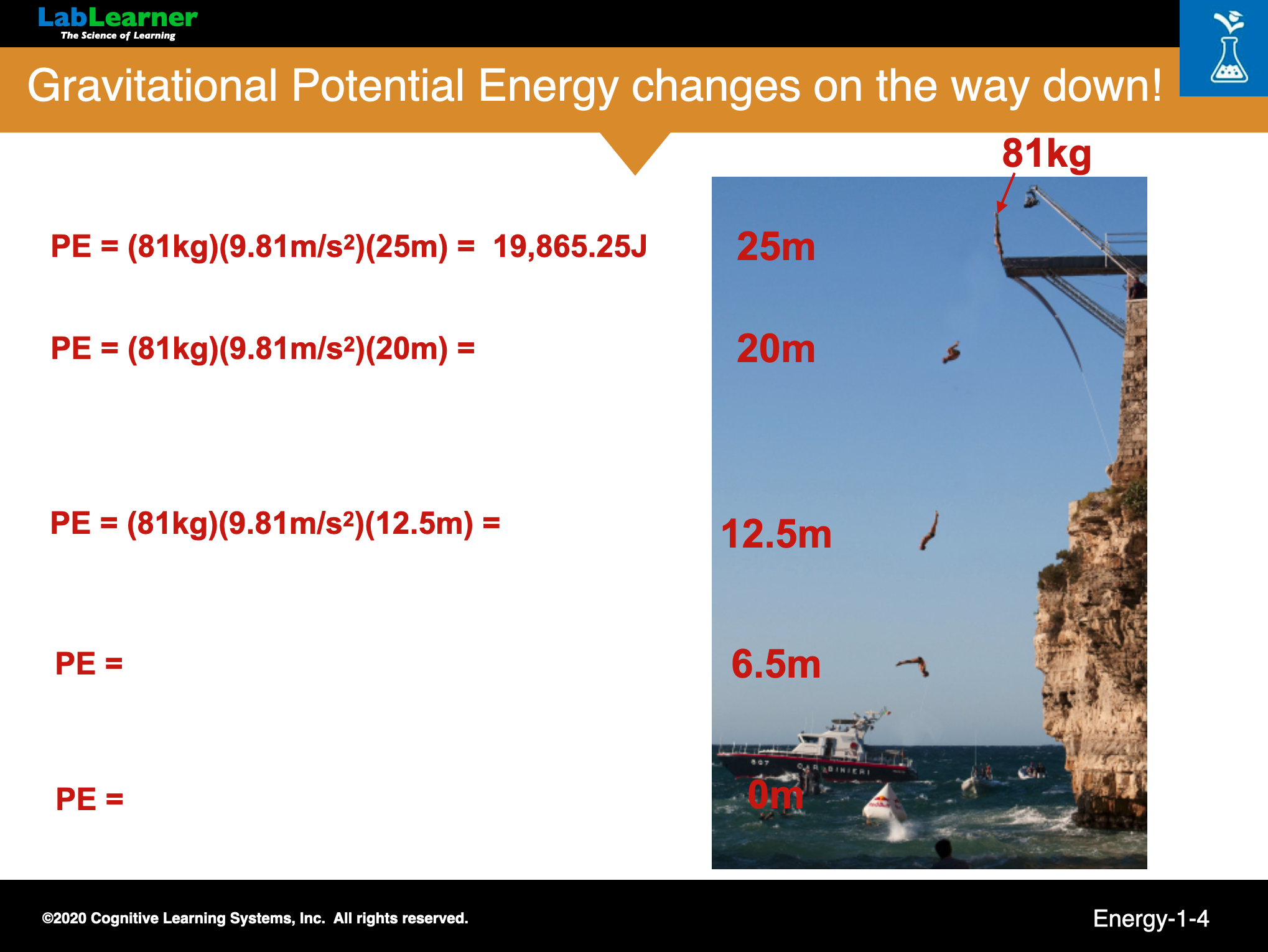 Discuss the solution to the problem when the diver is at 25 m.

Ask your child to calculate the PE at 20 m.

Ask your child to calculate the PE at 6.5 m.

Note: A second important aspect of this slide is that it provides us with a perfect platform to introduce the important concept of the conversion of potential to kinetic energy. 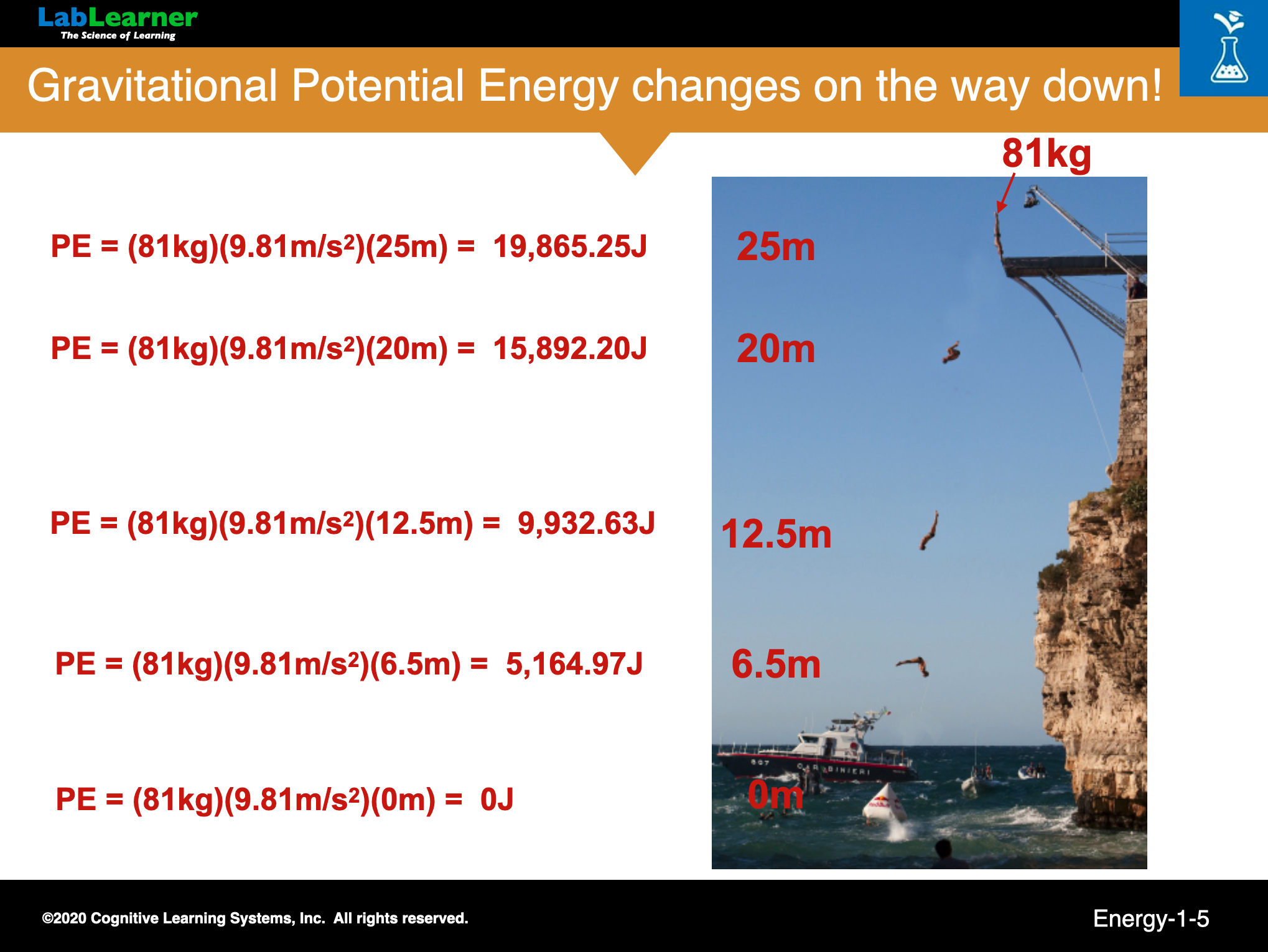 You may also discuss that, when hitting the surface, the diver will continue through the water for some distance before his buoyancy stops his further progress and he floats back up. To simplify the situation, we could have used an example of diving onto a solid concrete surface from a height of 25m. This tremendous amount of energy (19,865.25 J) hitting an immoveable surface and abruptly stopping would, of course, likely be lethal. 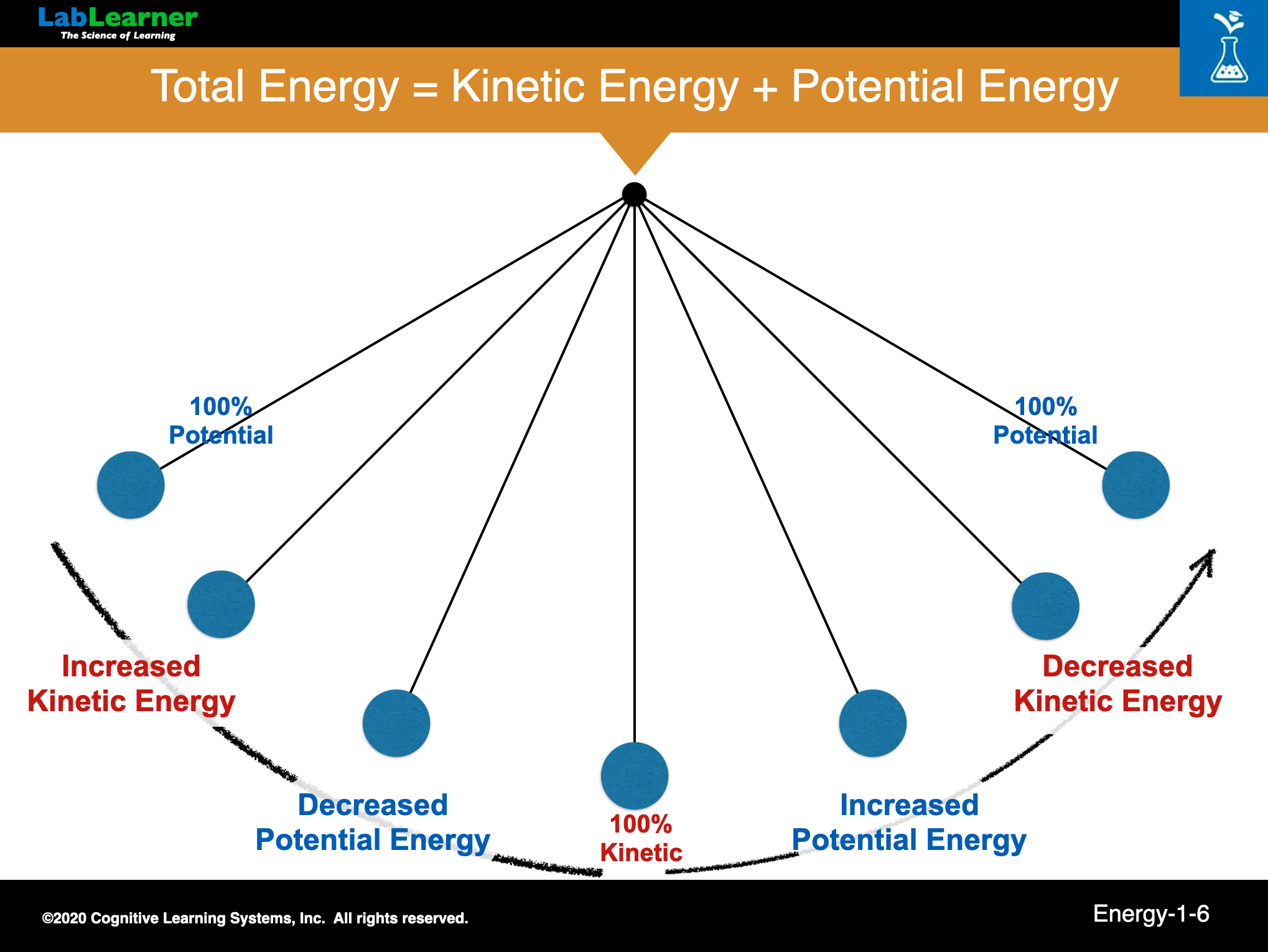 This slide shows various positions of a pendulum. Starting from the left, before the ball is released, 100% of the energy is in the form of potential energy. If we knew the height and mass of the ball we could easily calculate the potential energy and therefore the total energy.

At the perpendicular, 100% of the total energy is in the form of kinetic energy. There is no more stored, potential energy at this point.

This is similar to when you throw a ball straight up into the air and it momentarily pauses at its peak before falling back to Earth. After this momentary pause, the ball will be forced down again by gravity. Imagine what would happen if you threw the ball in outer space, where there is no gravity and therefore no gravitational potential energy! 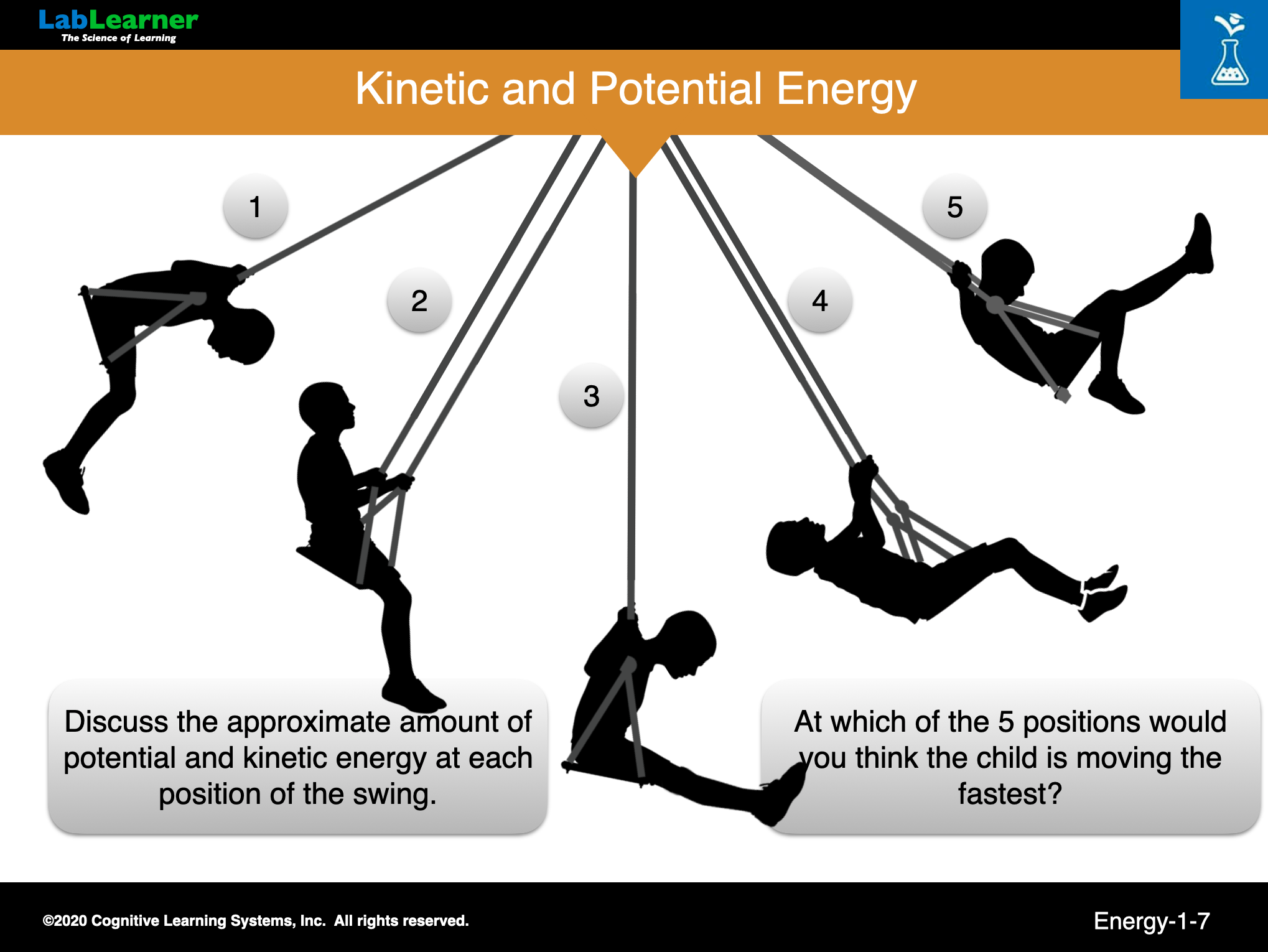 This slide follows directly from the previous slide in which the pendulum was introduced. If possible, go outdoors with your child and let them call out how much potential and kinetic energy they have at various swing positions. In other words (see the illustration for numbers):

Of course, in performing this demonstration, your child can’t “pump” to go faster. Pull them way up from behind and tell them to not pump their legs when you let go. As they swing to and fro, discuss how they are slowing down. Discuss how their height gets smaller and smaller with each cycle. Since energy can not be destroyed, where could this energy be going? [The answer complicates the demonstration but is nonetheless interesting. The energy is lost due to friction. Friction of your child’s body pushing against the air molecules and the rubbing of metal at the swings attachment point. We make up for this loss of gravitational potential energy to friction by pumping our legs, adding energy from our muscles.] 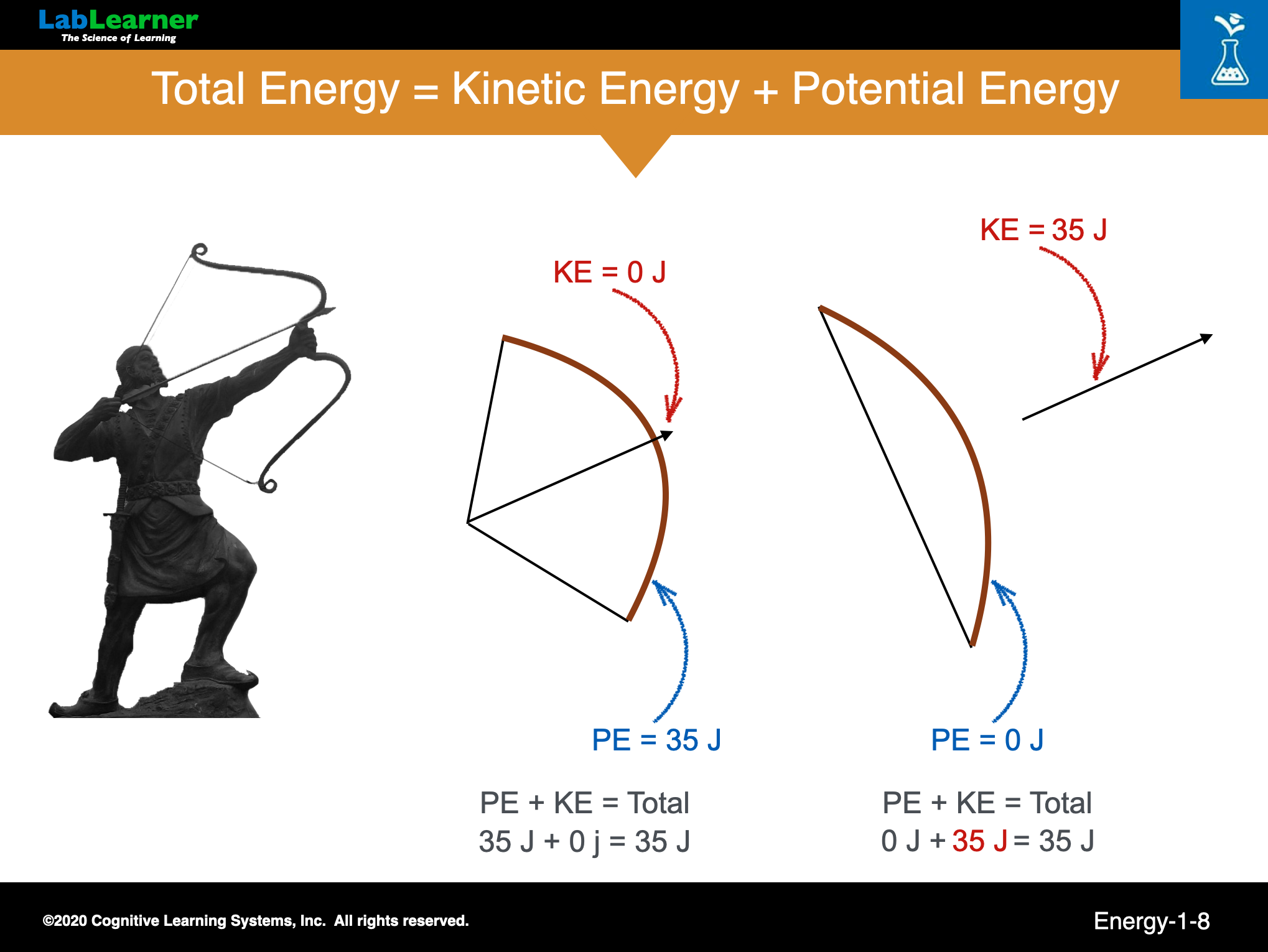 Note: This slide provides students with another opportunity to consider the potential/kinetic energy conversion.

When a bow is drawn, energy is stored in the structure of the deformed bow. There is no movement; there is no kinetic energy. All of the energy is potential energy.

Note: In the example in this slide, the amount of stored potential energy is shown to be 35 J. This is a reasonable amount of energy for draw on a bow.

Once the string is released and the bow snaps back to its original shape, the potential energy of the bow quickly collapses to zero. All of the stored potential energy is immediately converted to kinetic energy.

Notice the important equation shown in this slide: 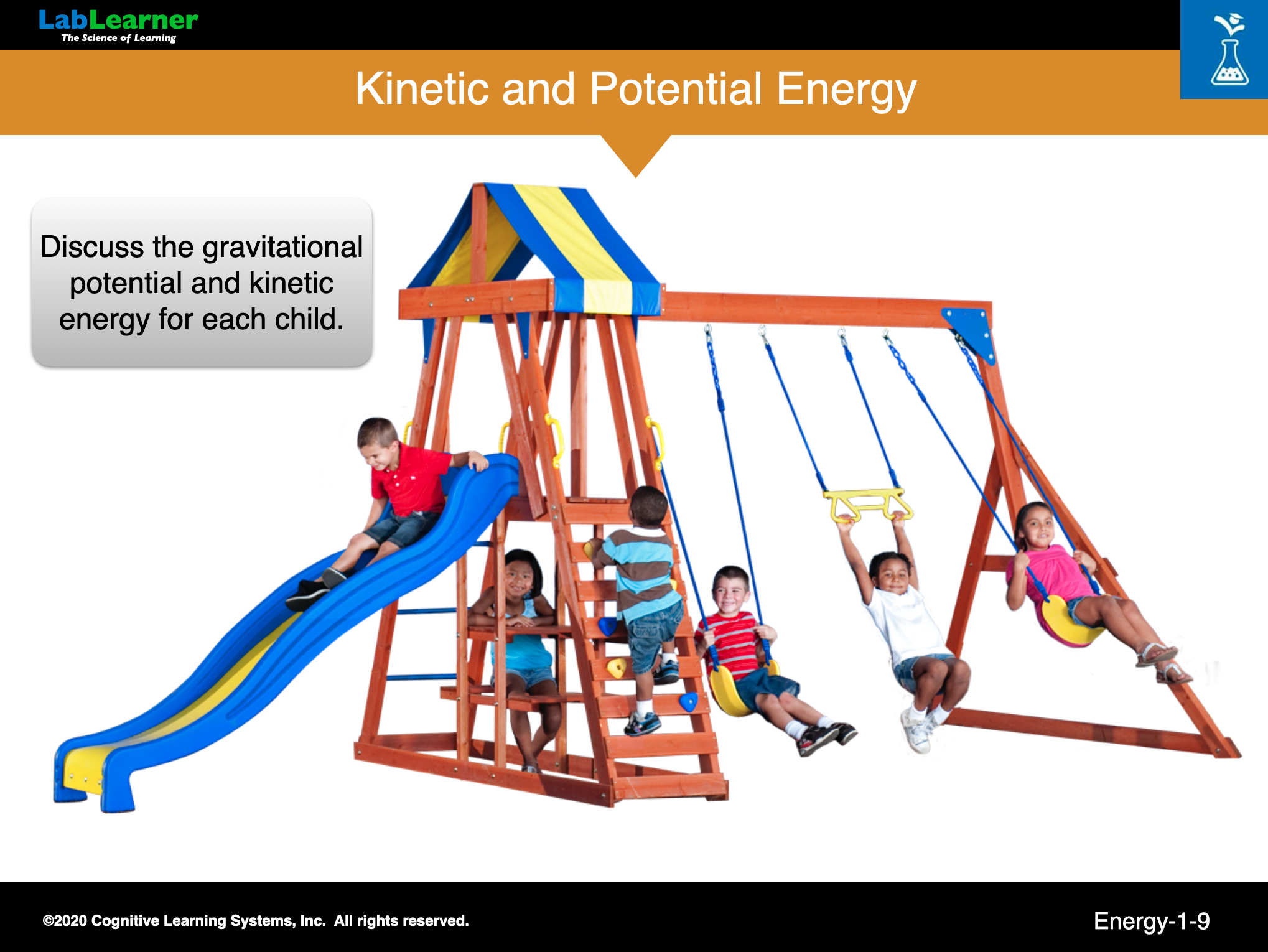 The child climbing the ladder (assume he is going up the ladder) is increasing his gravitational potential energy with each step up. To climb the ladder and increase his height and potential energy, he must add kinetic energy from the muscles in his legs and arms.

The three swinging children are all in various combinations of kinetic and potential energy depending on their position. Notice that, without knowing if a child is swinging forward or backward, it is impossible to say whether they are increasing or decreasing in potential energy.

Finally, the little girl sitting under the slide appears to be totally at rest. However, she has gravitational potential energy nonetheless. She would demonstrate this if she were to fall off her seat! 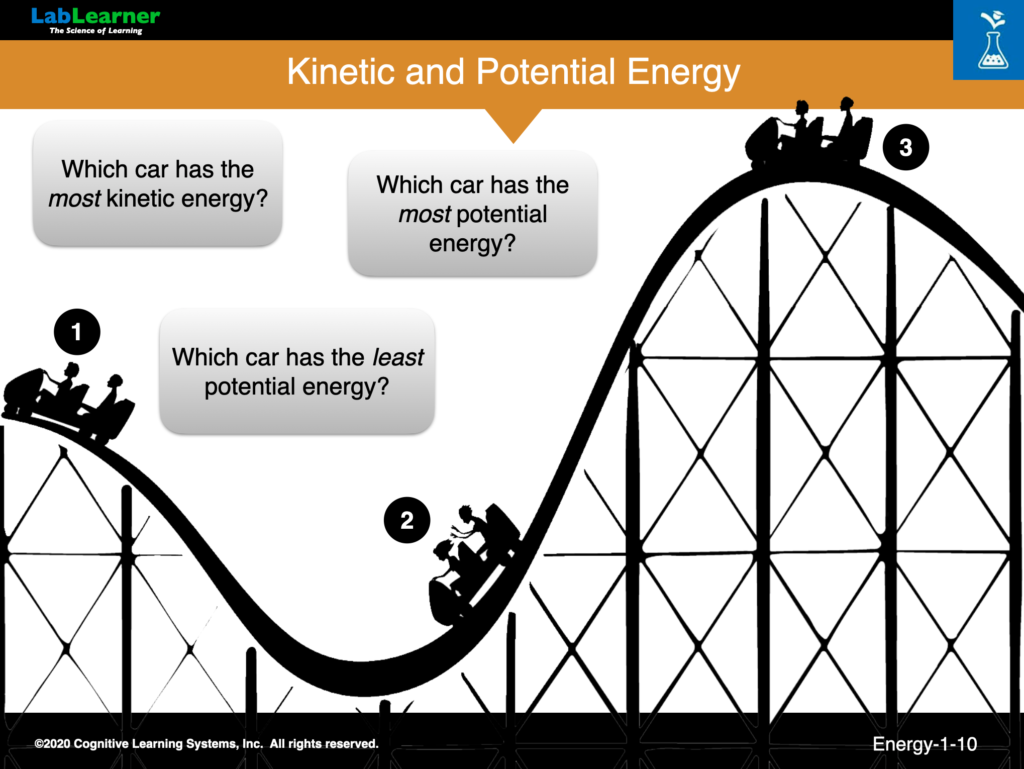 This final slide shows three positions of a car on a rollercoaster and asks three questions: