LabLearner Discussion: Push Me Pull You

LabLearner Discussions are designed for you to sit and discuss science topics with your child/student. Each slide below contains rich content to stimulate intelligent discussion with your student regardless of their age. Directed discussion is one of the most powerful ways we can interact with each other. Start with the first slide then move to the next slide below it as your discussion proceeds. Give it a try with your student. 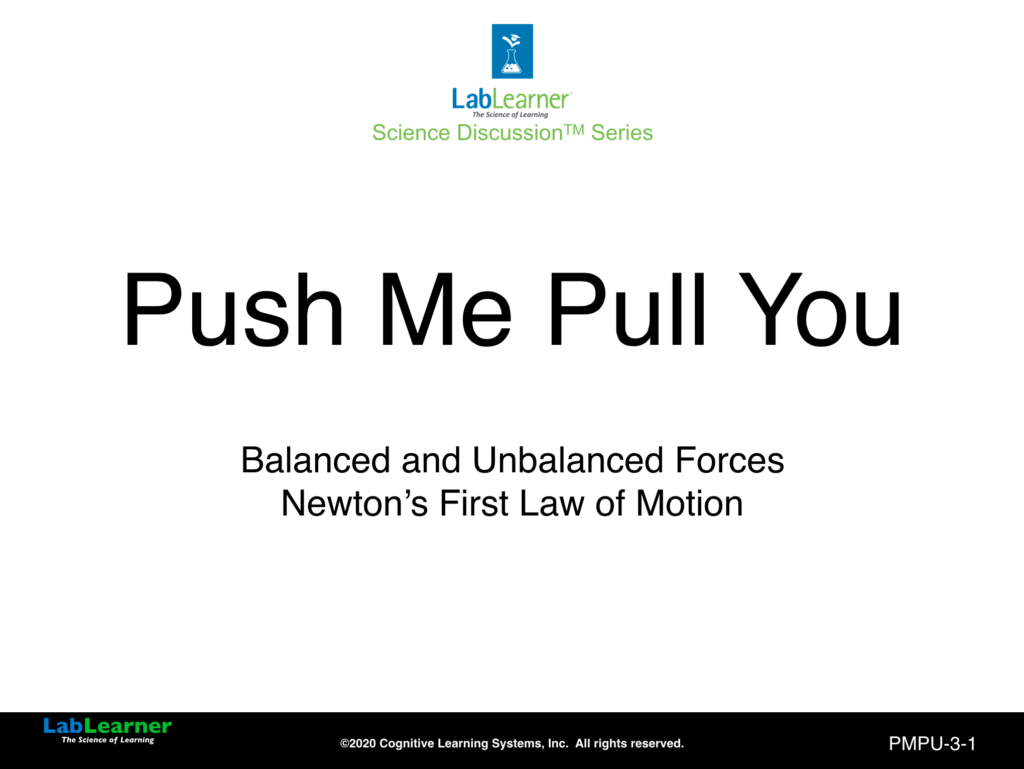 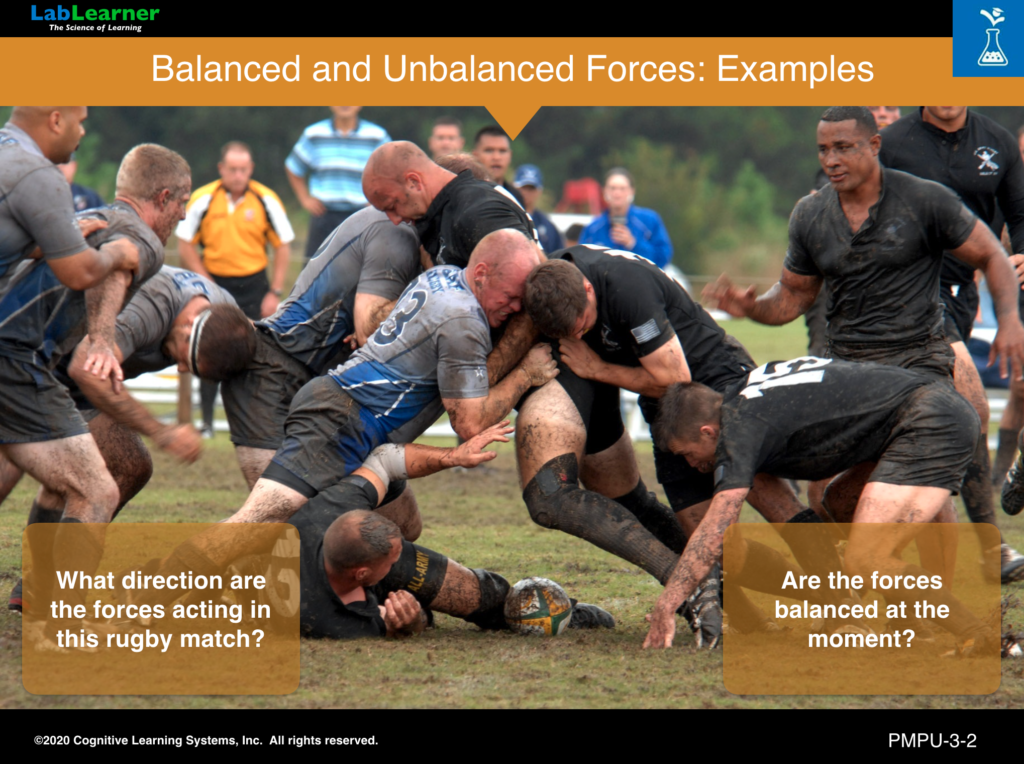 In this visual you and your child will begin your discussion of balanced and unbalanced forces. This photograph from a rugby match is the first example you will discuss. It is the first of three similar visuals. One can easily picture the invisible forces at work in this rugby match. Forces from the left confront forces coming from the right. The pile of players will not move one way or another very much as long as the forces are balanced.

Ask your child what could happen next in this picture to cause the pile to move to the left or to the right? For example, one of the players in the pile could get tired and begin to be pushed back. Alternatively, another player from one side or the other could rush into the pile and exert more force from his side and get the pile to move in the opposite direction. Athletes train so that they are faster to get to such a pile-up. They also do strength training so that they become stronger and can exert more force in situations such as this. Discuss how force is applied in other sports. 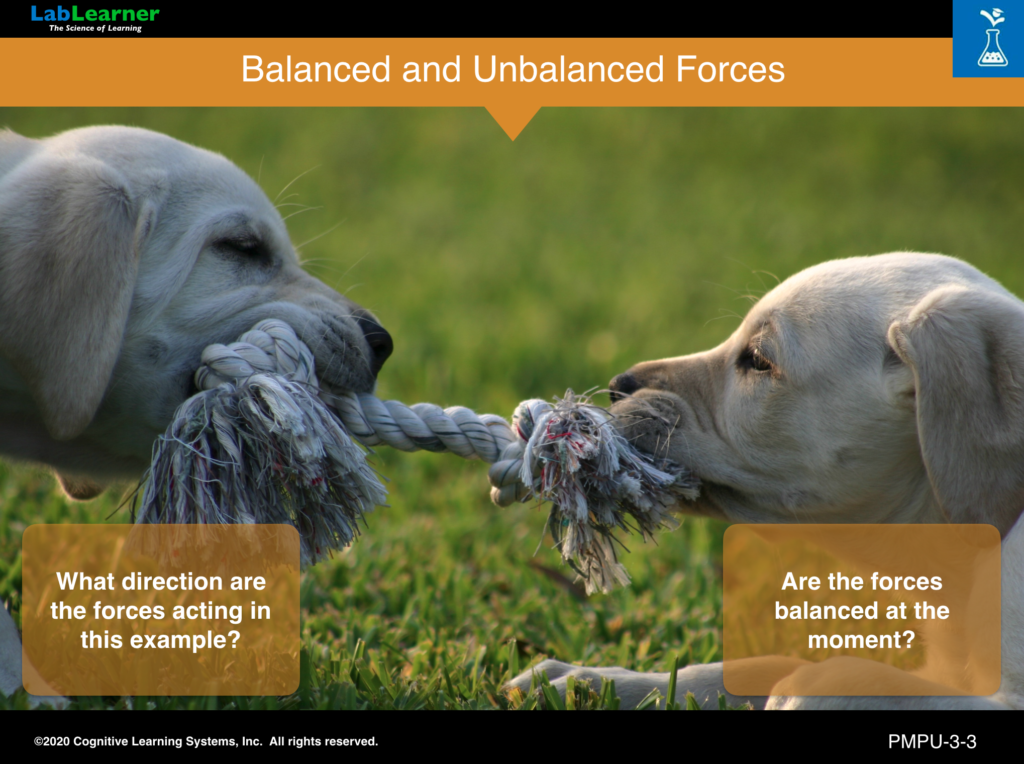 Here the forces acting on the rope toy are approximately balanced and the two dogs are at an impasse. The rope will not move unless one of the two dogs is able to exert a greater force. Notice that the balanced forces in this example (pulling away from each other) are in the exact opposite direction as the forces in the rugby example (pushing towards each other). Nonetheless, whether pulling or pushing, if the forces are balanced, no movement of the object on which the forces are acting upon will occur.

Finally, this visual shows yet another example of balanced forces competing with each other. In what direction are the forces being exerted in this situation (toward or away from us)? Are the forces in this arm wrestle more similar to the rugby situation or the tug-of-war between the two dogs? Why?

Hopefully, given these three simple examples, your child will learn to look for forces operating in other situations around them.

Don’t just look for the forces involved in moving objects like cars, basketballs, or the Moon. The three examples we have looked at – rugby players pushing against each other, dogs pulling on a rope, and two arm-wrestlers – resulted in very little actual movement. So, just because an object isn’t moving doesn’t mean that no forces are acting on it. If an object is not moving, it only indicates that the combined forces acting on it are balanced. 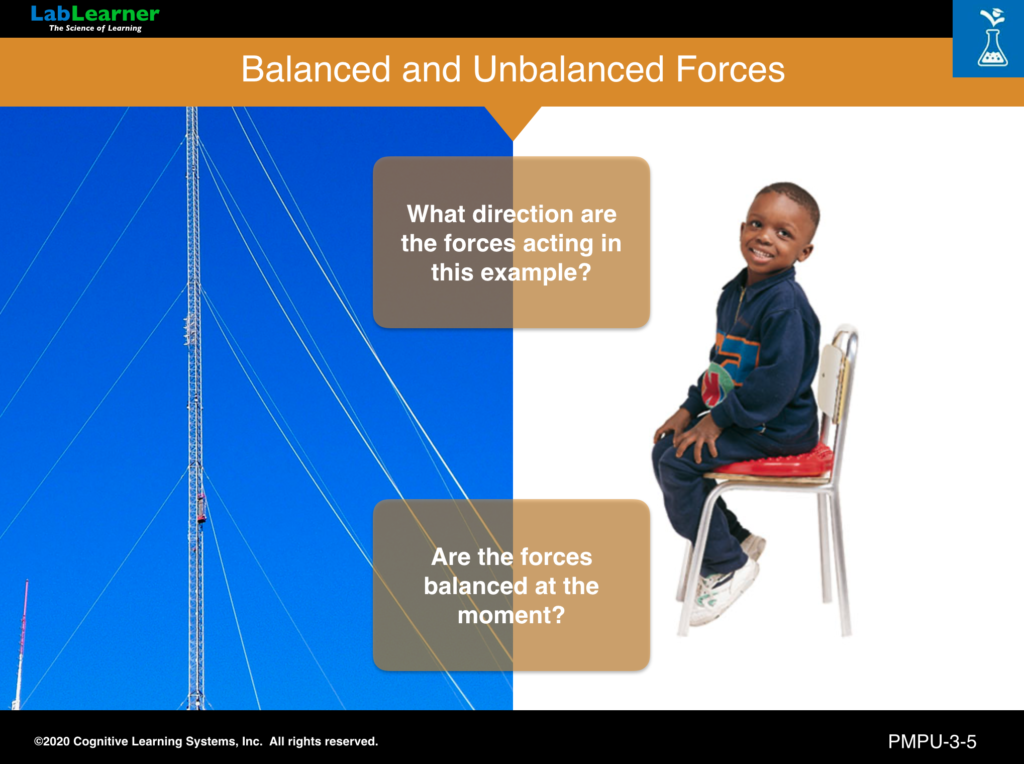 Remember, just because an object isn’t moving doesn’t mean that no forces are acting on it. It only indicates that the combined forces acting on it are balanced. Examine the two pictures in this slide. Discuss with your child the direction of the forces and whether or not the forces are balanced or unbalanced.

Discuss what would happen if all the cables on the right side of the television tower were cut. Would the forces acting on the tower remain balanced? What might happen if the cables were cut?

What about the boy in the chair? Would the boy move if the chair suddenly fell apart? What direction would he move? 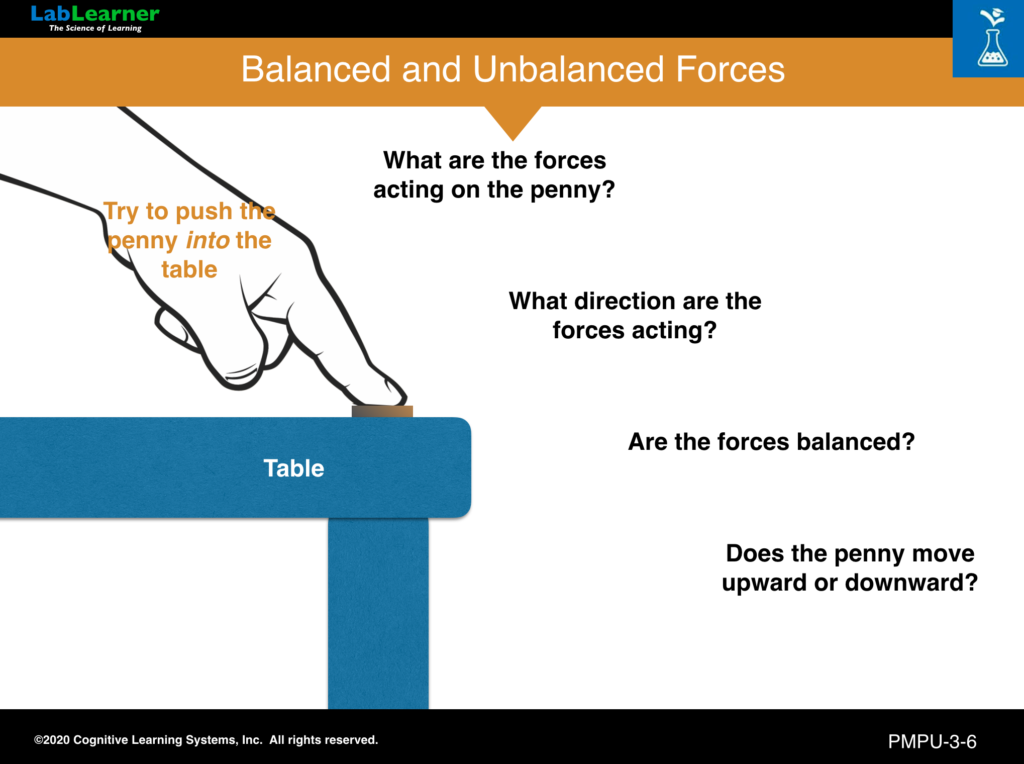 The last several visuals depict some very simple demonstrations of balanced and unbalanced forces that you can perform with your child. This visual depicts a situation in which a coin is pressed from the top firmly onto a table. Despite all the effort and force you or your child can exert downward on the coin it does not move downward because the table itself is exerting an equal force in the opposite direction. The harder your child presses down on the penny, the harder the table presses up on it.

Is this similar to the boy sitting on a chair in the preceding slide? Of course it is. The boy, with all his weight, is pressing down on the chair. However, the ground and the chair resist his downward force by pushing in the opposite direction. All objects have forces acting on them, don’t they? 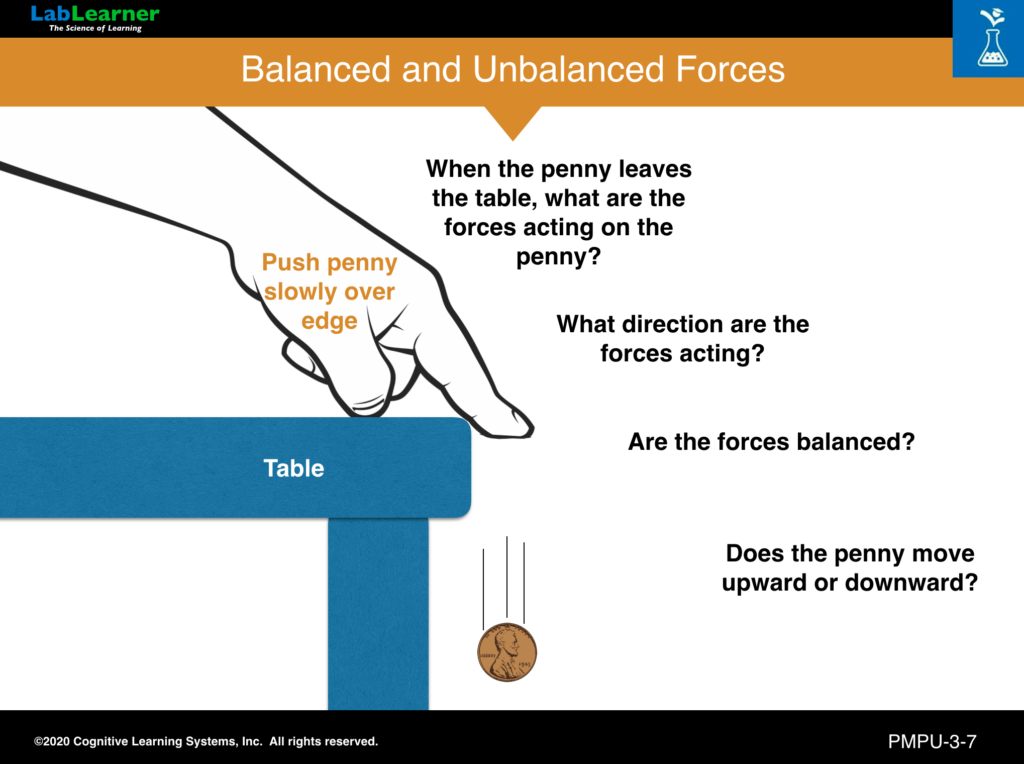 If however, the opposing force of the table is circumvented by pushing the coin over the edge of it, the table no longer provides an opposing force and the penny is no longer stuck between two balanced forces and can move. It moves down.

This is an interesting situation since the force of gravity is the only force acting on the penny once it escapes the surface of the table (except for a small amount of friction from the air). The finger is no longer needed to exert a force and the penny will move (fall) because no force is available to balance the downward force of gravity. When the penny lands, it will once again encounter an opposite and equal force – the floor – and will remain stationary as long as the forces remain balanced. 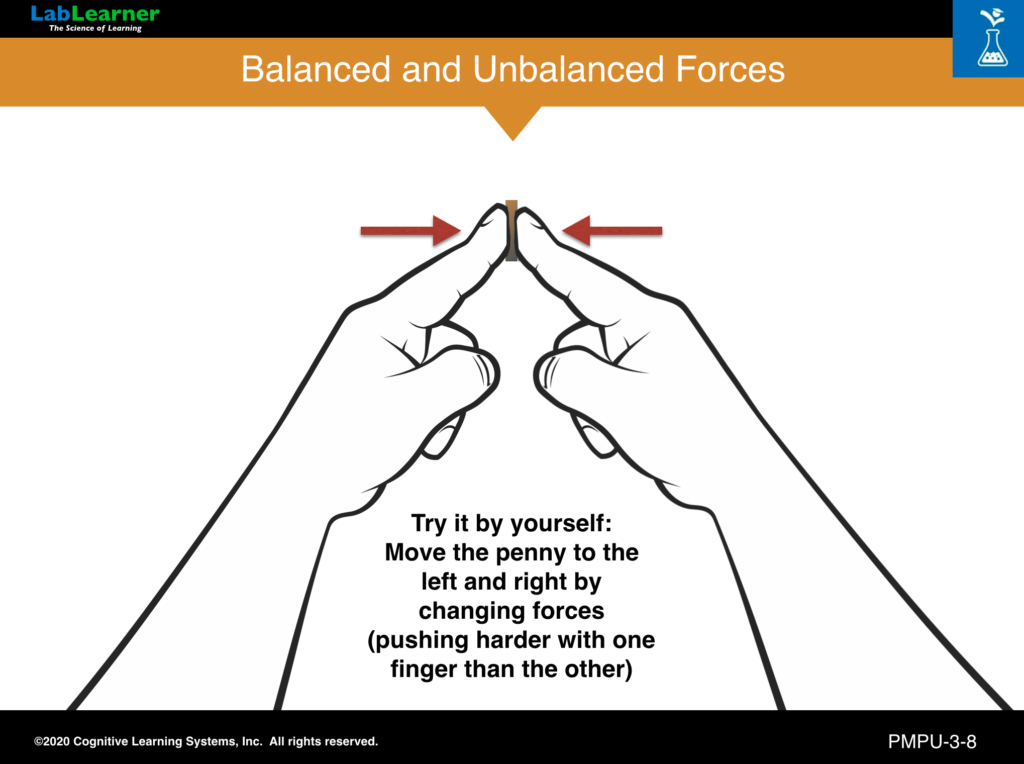 This visual shows another simple model for you and your child to experience balanced and unbalanced forces. In this form, your child can perform the demonstration on their own and modify the amount of force each finger exerts. 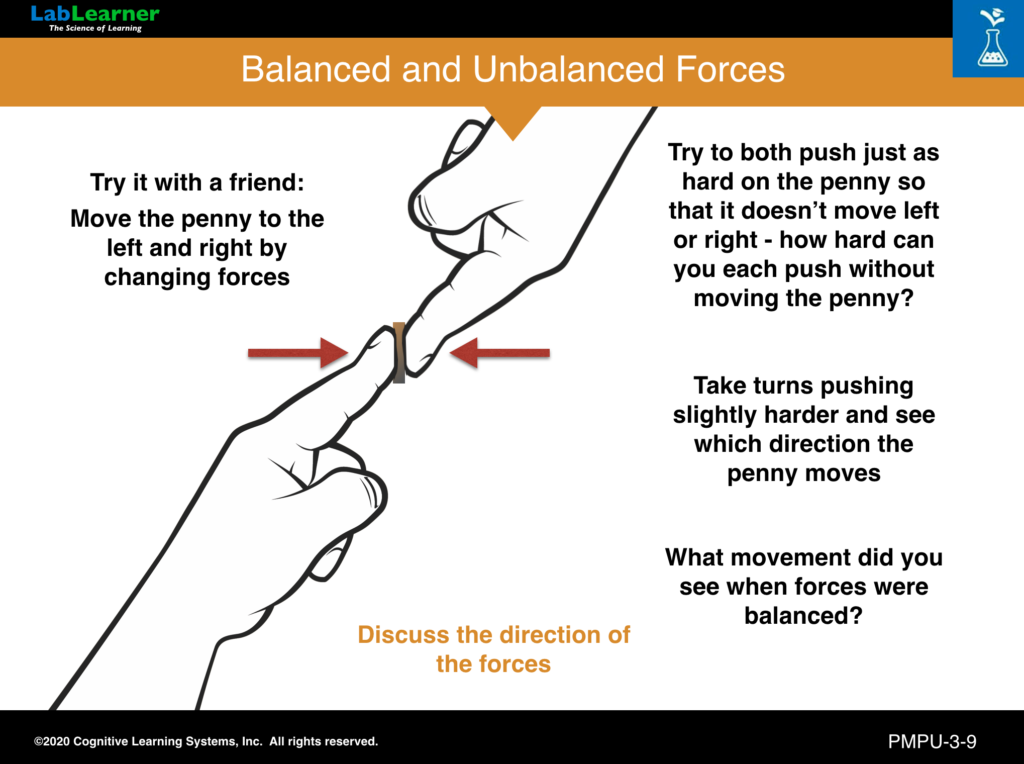 Finally, a demonstration of balanced and unbalanced forces can be performed with partners (you and your child or your child and a sibling or friend). This form of the demonstration is more interesting (and fun) since each child controls only one of the two opposing forces.

As force is applied, the key is to watch the direction the penny moves. Under conditions where both sides exert the exact same force, regardless of how strong that force may be, the penny will remain stationary.